Banned Items for Transportation – All Services

Dangerous goods, also called hazardous materials (“HazMat”), are solids, liquids, or gases that can harm people, other living organisms, property, or the environment. They are often subject to chemical regulations. Dangerous goods include materials that are radioactive, flammable, explosive or corrosive, oxidizers or asphyxiants, biohazardous, toxic, pathogen or allergen substances and organisms, but also physical conditions as compressed gases and liquids or hot material, including all goods containing such materials or chemicals, or may have other characteristics that render it hazardous in specific circumstances. The colours of each diamond in a way has reference to its hazard ie: Flammable = red, Explosive = orange because mixing red (flammable) with yellow (oxidising agent) creates orange. Non Flammable Non Toxic Gas = green, due to all compressed air vessels being this colour in France after World War II, France being where the diamond system originated.

Persons who handle dangerous goods will often wear protective equipment, and metropolitan fire departments often have a response team specifically trained to deal with accidents and spills. Persons who may come into contact with dangerous goods as part of their work are also often subject to monitoring or health surveillance to ensure that their exposure does not exceed occupational exposure limits.

Laws and regulations on the use and handling of hazardous materials may differ depending on the activity and status of the material. For example one set of requirements may apply to their use in the workplace while a different requirements may apply to spill response, sale for consumer use, or transportation. Most countries regulate some aspect of hazardous materials.

Information on this graphic changes depending on which, “Division” of explosive is shipped. Explosive Dangerous Goods have compatibility group letters assigned to facilitate segregation during transport. The letters used range from A to S excluding the letters I, M, O, P, Q and R. The example above shows an explosive with a compatibility group “A” (shown as 1.1A). The actual letter shown would depend on the specific properties of the substance being transported.

The United States Department of Transportation (DOT) regulates hazmat transportation within the territory of the US. 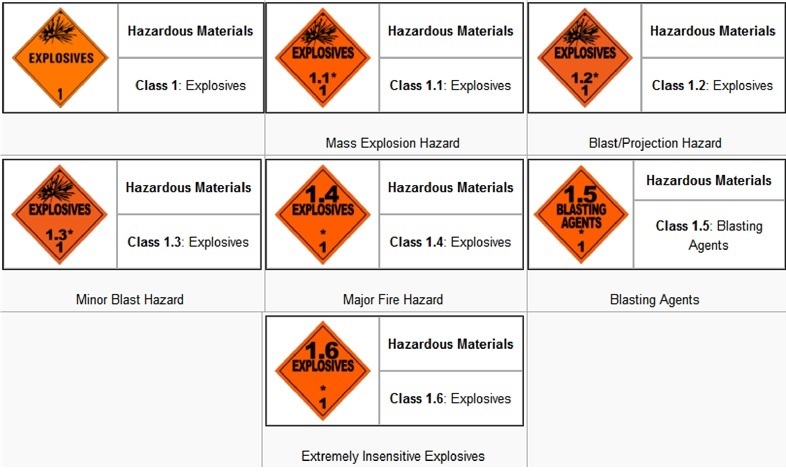 Hazardous substances that do not fall into the other categories. Example: asbestos, air-bag inflators, self inflating life rafts, dry ice